Being born and growing up in a musical household meant that, I’d be encouraged to pursue Carnatic music even before I’d speak.

The following quote holds a testament for my upbringing. And, I am beginning to realize what a blessing it is to have lived life this way.

Music is there to enrich your life and make you aware of things in a slightly different way. ~Andrew Eldritch

Everyday, I was either made to listen to live concerts of reputed musicians, or listen to recordings from several tapes / radio relaying concerts of yesteryear musicians. My thatha (grandfather), my guru, Sri Thirupoonthuruthy Venkatesan would ensure that I paid attention to every little nuance and absorbed as much as I can. I reminisce these listening sessions with him which included Alathur Brothers’s (who were thatha’s gurus) ‘EmA Ni Ne’ in Mukhari, GNB’s ‘Manasuloni’ in Varamu, MLV’s ‘Nannu pAlimpa’ in Mohanam, Semmangudi’s ‘RAma Ni SamAnam evaru’ in Karaharapriya, M S Subbhulakshmi’s ‘SarOja Dala Netri’ in Shankarabaranam and many alike.

Until I turned 15-16, I knew nothing, other than music. I’d simply learn compositions taught by my grandfather, resume to endless hours of practice sessions at home with my amma following up on a day to day basis. 24 hours wasn’t enough but, amma ensured that I utilized every minute of it towards music and only music. Indeed, life was very different back then.

Sometimes, I begin to wonder the amount of things my amma has done, to make me who I am today. She was and is still a working woman. She could have progressed and moved up the career ladder. She chose to take it slow and never wanted to shift base from Chennai. She’d never retire on weekends, she almost single handedly managed home, aging grandparents, me and my erratic music schedules, very diligently. She missed being away from appa. So was appa missing all of us. But, they both made the conscious choice to do this, for me.

While amma was a disciplinarian, appa was liberal in every way. Possibly, because, I am the only daughter and he mostly got little time to spend with me back then. His enthusiasm to learn was infectious. He had an ear for good music and considered himself a fanboy of K V Mahadevan, M S Viswanathan, Ilaiyaraja and in that particular order (in current times, I tried influencing him, but that’s not affected him). He kept traveling on work and whenever he was home, he would narrate his musical influences mostly through story telling. It’s because of him, I got into exploring this side of the musical world (amidst a lot of resistance from amma).

“After silence, that which comes nearest to expressing the inexpressible is music.” ~ Aldous Huxley

I grew up, and suddenly, I preferred silence over music. Which only meant that, I needed a break from this beautiful art, especially in terms of performances. And, maybe, this is part and parcel of a package called life. I got into academics. Was mostly an average student, but worked very hard to catch up with everything that I thought, I missed in the last 18-20 years. I just wanted to stay away from all lime light that music exposed me to. I never quit learning music, but took a break from performing, very consciously.

The last 5 years between 20 and 25 was a phase, where I listened to more music – of all forms. Call me a rebel, call me a fool, call me anything you want. But, this would be one phase that I’d call a liberating one. I listened more to Hindustani Music, Ghazals, Jazz, Metal, Rock, Fusion and to endless genres and forms of this art. I rediscovered myself through this journey.

Today, at 26, I continue to learn from Sumithra akka. She has helped me gain confidence and strength as a person. I see life coming back in full circle.

But, I am still confused, I am still insecure about what I should do, in terms of performances, my contributions for the art and a plethora of things. The battle is between art and art itself. Unless, someone who has gone through the last 26 years from my shoes, I don’t expect anyone to understand this, as well.

For now, I just trust that the art will take care of my being and help me sail through this phase and to a better one, at the earliest.

Through this journey, I had support and empathy from several musicians and I am ever grateful for their presence. You all know who you are.

The movie ‘Nalanum Nandhiniyum‘ is an upcoming movie directed by Venkatesan Ramakrishnan, produced by Ravindar Chandrasekaran of Libra Productions. My association in this film project is because of the song I recorded for the extremely talented Ashwath Naganathan, the Music Director of this film.

It was that time of the year when I used to juggle between 2 cities – Pune and Chennai and somewhere around early 2012, one of my closest friends (name not disclosed here. But you know who you are) referred my name to Ashwath Naganathan. So, we met and tried on different genre songs, scales, feel, emotion, lyrics and everything a typical singer goes through musically. We had several sessions post this meet and recorded few tracks for this album as well.

After several months, I was asked to come for a final recording of the song and, today, after lots of ups and downs, I am credited for my song ‘Veetukulla Vaanavillu’. Ashwath wanted some newness in the song since its an unplugged version and gave me all the freedom to experiment. I share the song space with friends Madhumita Ramesh and Deepak from ‘Airtel Super Singer 2008’ and ‘Zee SaReGaMaPa Challenge 2009’ respectively.

The entire music album gets released in Geneva, Switzerland today.

P.S : I am really grateful to you Ashwath, because you genuinely believed in my singing and worked your way around to have me in this project. Thank you so so much!

P.P.S : As always, I share my happiness with you all – my supportive parents, my gurus, my friends, well-wishers and to all of you reading this post. 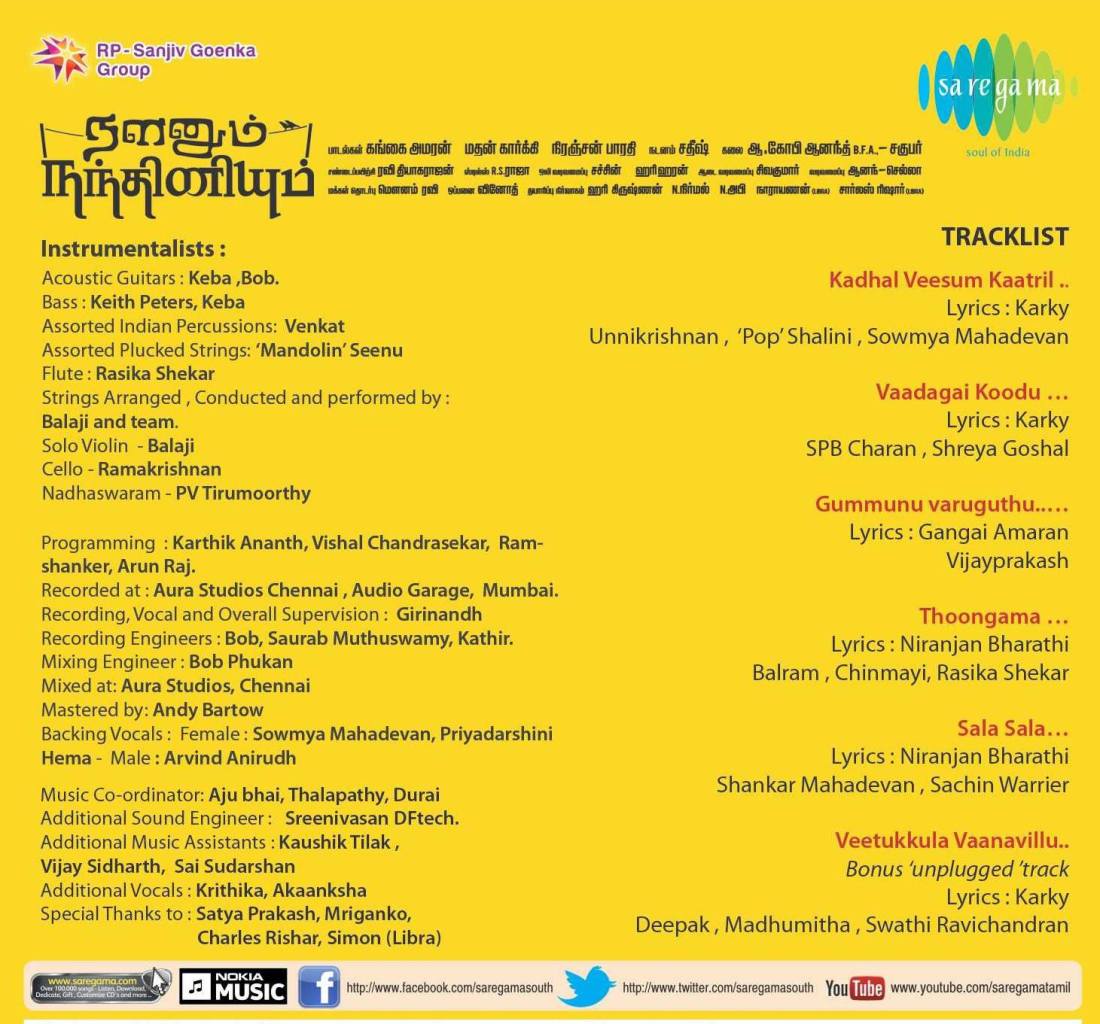